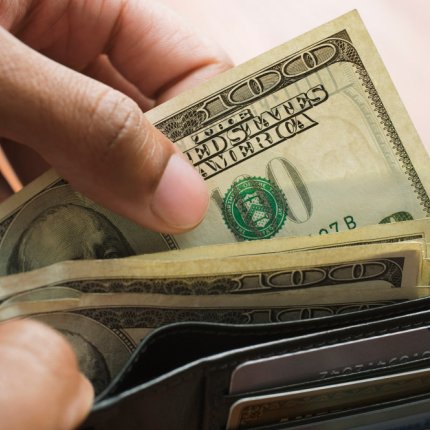 Americans may be addicted to shopping, but that doesn’t mean that we don’t sometimes cut back.

“In the past five years, consumers learned a hard lesson on getting by on less,” Pam Goodfellow, an analyst with Prosper Insights & Analytics said in an interview posted on the National Retail Federation website.

The drop in consumer expenditures didn’t happen evenly across the board, however. People spent more in certain categories measured by the BLS, like health care, rent, and utilities, while spending on food held steady from 2012 to 2013. Another couple of areas where Americans didn’t making dramatic cutbacks? Vices such as alcohol and tobacco. Spending on alcohol shrunk by just 1.3% from 2012 to 2013, from $451 in 2012 to $445 in 2013. Spending on tobacco products saw an even smaller decline of just $2 per year, from $332 to $330.

Still, consumers did tighten their spending in several key areas in 2013, including education, entertainment, and clothing. Below, we review six areas that had some of the largest percentage decreases in consumer spending, according to BLS data.

Consumers saved money on premiums for life insurance, accident, disability, and other types of personal insurance in 2013, with money spent in this area falling 9.6%, from $353 to $319. Note: This number doesn’t include premiums paid for homeowners or car insurance, which are included in the BLS’s housing and transportation categories, respectively. For people looking to save money in this category, taking a second look at life insurance premiums may be a good idea. If you’re single and have no kids, for example, you can probably skip life insurance entirely, notes Life Happens, a nonprofit educational organization founded by several large insurance companies, while other people may have more coverage than they really need.

In 2013, consumer spending on apparel and related services, like dry cleaning and alterations, dropped 7.6% from 2012, from $1,736 to $1,604. Some of the steepest drops in spending in this category came at higher income levels. People in the fourth- and fifth-highest income quintiles spent 12% and 8.8% less on apparel in 2013 compared to 2012, respectively. Spending on clothing may have dipped slightly in 2013, but that doesn’t mean that people aren’t wearing the latest fashions. Americans buy billions of articles of clothing every year — 64 new closet-cluttering pieces of clothing per person, plus more than seven pairs of new shoes, in 2013 alone, according to the American Apparel and Footwear Association.

Despite lots of noise about the rising costs of college, spending on education actually dropped in 2013. Overall, consumers spent 5.7% less on tuition, textbooks, supplies, and other education expenses in 2013 compared to 2012, or $1,138 versus $1,207. Not surprisingly, education spending tended to be higher among married couples with children, who spent an average of $2,223 per year in this category. Education spending was also higher in households where at least one person was a college graduate — $2,090 versus $537 in those households where there were no college degree holders.

Spending on gas, diesel fuel and motor oil dropped 5.3% from 2012 to 2013, from $2,756 to $2,611. That’s the first decrease since 2009. That means that the average person was spending $217.58 per month on gas alone. While 2014 consumer spending numbers haven’t yet been released, consumer spending on gas could fall even further, given the significant decrease in gas prices over the past year. The average price of a regular gallon of gas was $2.45 per gallon as of March 9, according to AAA, compared to $3.48 per gallon one year earlier.

Consumer spending on entertainment dropped 4.7% from 2012 to 2013, from $2,605 to $2,482. Most Americans spend more than $2,000 per year on entertainment, with only those under age 25 or over age 75 spending less than that amount. What kind of expenses fall into this category? Money spent on movies, sporting events, cable TV and video games, exercise and sporting equipment, and even pets and related expenses. (Yes, Fido’s vet bill counts as an entertainment expense.)

Americans were slightly less generous in 2013, as cash contributions fell 4.1% from 2012 to 2013, from $1,913 to $1,834. Low-income people cut back the most, with average annual cash contributions for people in the lowest income quintile falling by $121, or 17.3%. In addition to donations to charitable organizations, cash contributions also includes any other money given to people who aren’t living with a person, including alimony and child support, or even spending money deposited in a college student’s bank account.