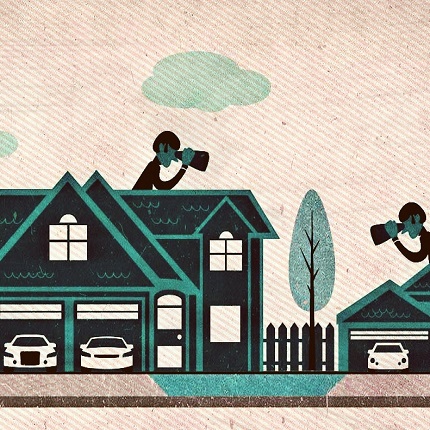 “The Joneses can kiss our assets!”

That’s what one thrifty-spender told Jeff Yeager when he interviewed her for his book “The Cheapskate Next Door.” The kind of people he writes about — “cheapskates,” but not in a pejorative sense — don’t care about what other people think of the way they live, how much they spend or what they own (or more commonly don’t own).

They’ve immunized themselves against that kind of peer pressure, and as a result, they enjoy strong financial health and are happier because of it. But they’re also quite rare.

While “keeping up with the Joneses” — measuring your financial success against that of your peers and letting their spending behavior influence your own — has always weighed heavily on the minds of many, the phenomenon might actually be on the rise. A recent UBS Investor Watch survey found that millennials are more insecure and perplexed about how their wealth compares to that of their peers than those in previous generations (68 percent of millennials vs. 53 percent of baby boomers).

The same survey found that three-quarters of millennials have snooped online to check out their cohort’s salaries and home values, among other juicy details of their financial and professional lives. And maybe most surprising: The millennials who are the least content with their wealth and the least likely to believe they’ve “made it” in terms of their financial status are those who are already millionaires!

What’s wrong with striving to keep up with the Joneses and their spending? Well, maybe nothing…if you can afford it and it makes you happy. Of course, many people truly can’t afford it, as evidenced by record levels of consumer debt in recent times.

As Will Rogers once said, “Too many people spend money they haven’t earned to buy things they don’t want to impress people they don’t like.”

Here’s some advice for paying less attention to how the Joneses are doing — and what they’re buying — and focusing instead on your own financial health and the things in life that will truly make you happy:

1. Take A Good Look At What’s Really Behind The Jones’ Front Door

As personal finance guru Dave Ramsey once reminded people in his blog, “The Joneses are broke.” Or, they’re likely to be. So coveting what they have and emulating their spending behavior can have tragic financial consequences. Stop and ask yourself if those you envy are really able to afford the lifestyles they live, or are they losing sleep over the very real prospect of losing everything?

Cheapskates, Daniel Newman, put it this way: “When I drive down the street, what would really impress me is if there was a sign in the front yards of the houses that were actually paid for and the homeowners were entirely living debt-free. Now that’s what I call curb appeal.”

Sometimes you see bumper sticker on older cars: “Don’t Laugh. It’s Paid For.” Be proud of the fact that you’re living within your means, and flaunt your thrift rather than follow the herd by being a conspicuous consumer. A superior and open attitude about your financial lifestyle choices can be a very healthy thing.

Cheapskate Kim Gillespie said, “Being in my mid-20s, my only struggle is not to roll my eyes too rudely at all my peers’ unnecessary gadgets.”

3. Filter Your Media And Advertising Consumption

According to Juliet Schor, professor of sociology at Boston College and author of “The Overspent American: Why We Want What We Don’t Need,” Americans increasingly set their financial and lifestyle expectations not so much on how the Joneses live, but on how the people they see on TV and in other media live. Whether it’s a TV sitcom or a commercial advertisement, we don’t just want what our peers or neighbors have — we want the lifestyle of the rich and famous as depicted in the media, which is unrealistic.

“There are two kinds people: Those who ask for separate checks when you go out to dinner with them, and those who don’t and are embarrassed if you do. Frankly, we prefer to be friends with the former.”

That’s what Gerald Thomson from Phoenix said about how he and his wife Julia choose the people they pal around with, at least in part. Hanging out with people who share your attitudes and values about money and spending can alleviate a lot of the peer pressure to keep up with the Joneses.

Curb impulse purchases and shake off the influence of the Joneses by looking through your discretionary expenditures at the end of each month and asking yourself one simple question: “If I had it to do over again, would I have bought that?” Keep a running list of those purchases you regret and review the list often. You’ll learn from your spending mistakes, and with each monthly audit, your list will shrink as your bank balance grows.

6. Don’t Let Your Kids Tell You What To Do…Or Buy

If you have children — or ever plan to have kids — take an hour to watch the documentary “Consuming Kids: The Commercialization of Childhood.” According to the 2008 film, American children have influence on more than $700 billion in annual consumer spending, with more and more companies specifically targeting kids in their advertising as a way of indirectly influencing their parents to spend on everything from junk food to family cars. So beware, and be conscious of not just the impact the Joneses might be having on your spending, but the impact the Jones’ kids might be having on your kids and therefore on your purchasing decisions.

“Always ask yourself, ‘Do [I] want to buy that expensive item [I] will probably get rid of in a few years, or do [I] want to increase [my] chances of being able to retire earlier?’ Thinking bigger picture helps immensely with making financially wise decisions.”

That’s the sage advice of cheapskate Erica Lui from Honolulu — a pretty wise practice for anyone at any age, particularly for a millennial like Lui.

8. And Always Remember This: Someone Else Is Happy With Less Than What You Have

Counting your blessings and appreciating all of the wonderful things you probably already have in your life but routinely take for granted is easier said than done. Volunteering some of your time to help others who are in need can fix that instantly. Websites like volunteermatch.org and Idealist.org can help you find fulfilling volunteer opportunities in your area that will give you a whole new perspective on this silliness known as “Keeping Up With The Joneses.”