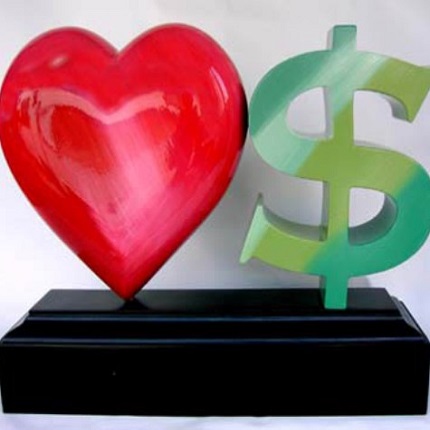 Just celebrating Valentine’s Day this past weekend, commitment and engagement were are on the minds of couples in love.

A 2013 study found that six million people were planning to pop the question or expecting to answer on cupid’s holiday.

If a major commitment is on the horizon for you and your loved one, you’ll also need to start thinking of the practical side of taking a relationship to a deeper level — namely when it comes to money. While it may not sound all that romantic, becoming more serious about someone does have financial implications. It even has consequences for your relationship: being clear about money from the outset can obviate potential disputes.

“If people combine finances or jump into stuff before knowing where they are, it can create a lot of conflict in the relationship. Vetting that beforehand can smooth out the ride,” says Katie Brewer, certified financial planner and financial coach to Gen X and Gen Y at Your Richest Life.

But learning about your partner’s finances should not be an interrogation — nor does it need to be. In fact, you probably already have made observations about his or her money habits or financial situation simply by dining out, going on vacation, discussing the news or brainstorming how one of you can get a raise. (Read here to find out how to get to know your partner’s financial history organically.)

However, there may still be some unknown information that it would behoove you to know, if you’re ready to take the next step.  Before we dive in, keep in mind that sharing more intimate details of your financial lives isn’t about seeing if your partner has gotten all A’s in life’s personal finance class. It’s more about open communication and finding out “can you come to an agreement of how you’re going to handle past and future stuff?” says Brewer.

In order to make it feel more like a conversation and less like an interview, start with your own story. “Open the door up by saying, here are my financial goals,” says Brewer. “Being able to say, I want to be able to retire at 50 or buy a house in five years gets the other person talking about where they see themselves going.” And there’s no need to get it all on the table right away. Of the financial facts you still don’t know, you’ll probably find natural opportunities to learn about them over time.

With establishing open communication as your guiding principle, here are the financial facts you should know about your partner.

1. Attitude Toward Money, And How It Formed

You may have picked up on your partner’s general relationship with money through everyday interactions, but it can be helpful to know where that comes from. Is he spontaneous with money because his parents were the same way or because they were extremely frugal? Or is she careful with money because she once unexpectedly lost a job or because her family spent it recklessly? (Read here for more tips on how to have a money conversation.) Brewer also suggests trying out a card game called Money Habitudes (which has an online version) that can make it easier to talk about money.

If you’re dating someone who wants to live minimally in order to retire at age 50, and you’d like to succeed professionally and live large, your lifestyle aspirations may not match. Furthermore, if someone doesn’t have financial goals, that could be a red flag. Brewer says if your partner immediately blows her bonus the second she gets it, then that might force you into a role in the relationship that you may not want. Though people in a relationship usually naturally divide responsibilities, it won’t work if one person shoulders all the responsibility of staying on track while the other person is allowed to indulge in behaviors that take the couple away from their goals. (Read here to learn how to set financial goals you’ll actually achieve.)

This is different from your partner’s relationship to money from childhood or family issues. Depending on the age of your partner, it could involve past mistakes that have brought his or her credit score to 600. “You can ask, ‘Was there some big event that happened in the past that caused that to go down?’ says Brewer. “That way it’s not a surprise down the road when you try to buy a house.” However, if the reason is that he or she still hasn’t gotten the hang of paying the bills on time and seems not to have learned a lesson or changed a habit, you should be aware of that. On the flip side, your partner’s financial history could also be her trajectory from living frugally on a modest income to save and launch her own business.

You may have a ballpark figure for this, based on his or her profession. While the exact dollar amount isn’t that important, knowing the range should give you an idea of what kind of lifestyle this person desires or is at least capable of having. And if it’s a different level than what you’re interested in, you have to decide if you’re willing to accept it, especially if you will be the higher earner. “If you’re a real go-getter, and this person is somebody who goes and joins the Peace Corps and isn’t making a lot of money, you need to weigh that — that you’ll be the person who supports this relationship because this person is so giving of their time and efforts,” says Brewer.

Knowing your partner’s income could also be important to compare against his or her spending. If he lives the high life but earns less than six figures, that could be a sign that he’s falling into debt. (If you’re looking to boost your income, make sure to avoid these mistakes when asking for a raise.)

If you are considering marriage with your beloved, then it’s good to be aware of the amount of debt he or she carries. You may someday face the question of whether or not to become a joint account holder. Even if you decide not to do that, you’d also want to know his or her debt level simply for budgeting purposes. If a big chunk of your future spouse’s income is going toward student loan debt, it’s something you’d want to know in advance.

When finding out the amount of your partner’s debt, you’ll also want to look into how she accrued it and her plan for paying it off. “If someone has $50,000 of debt because they worked their way through college, it’s different than if someone has $50,000 of credit card debt because they have no idea how to budget,” says Brewer, adding that how your partner is paying down debt illuminates financial personality.

While everyone’s savings level will be different depending on income, debt and other factors, it’s helpful to have a partner who recognizes the importance of saving so you can achieve certain goals together, whether they are as small as taking a vacation or as big as buying a house together.

So, while you might be reassured to find that your early-20s boyfriend with $50,000 of debt has $1,000 or one month’s worth of expenses saved, it might be a red flag to see the same level of savings from your mid-30s law partner girlfriend.

How you interpret this factor is also influenced by age. While couples in their early 20s still have time to arrange their finances to be able to prioritize retirement (whether by paying down student loan debt or simply earning more), if your partner is in his 30s or older and hasn’t yet begun to think about retirement while you’re imagining a jetsetting retirement, you should consider whether you’ll have time to get on the same page. (Find out the big money mistakes retirees make.)

If things do work out long-term and you decide to make a major commitment like marriage, then your partner’s credit score will affect how well you are able to tackle goals like buying a house together. While a low number shouldn’t be a deal breaker, it’s best to know in advance if there are any issues rather than finding out when you’ve found your dream home and are at the mortgage broker’s office. (Here’s where you can find your credit score for free.)

9. His Or Her Reaction To A Financial Or Lifestyle Dreams Of Yours

If you fantasize of a future that requires your partner to agree to it, you probably want to get a sense of how he or she might feel about it. For instance, if you’d really like to be a stay-at-home parent, you might find out whether anyone in your partner’s family didn’t work, and how he or she might feel about being the only working parent. Or, if you’d like to retire super early, like age 50 or younger, and want to live extremely frugally until then in order to make this happen, you’d probably want to gauge his or her reaction to this plan.

10. If You Decide To Get Even More Serious …

If you’re fairly certain you want to get engaged, or once you are engaged, it can be helpful to have money conversations with a counselor or mediator present to help guide the conversation. And, once you’ve definitely decided to move forward, follow these tips on how to arrange your finances as newlyweds.