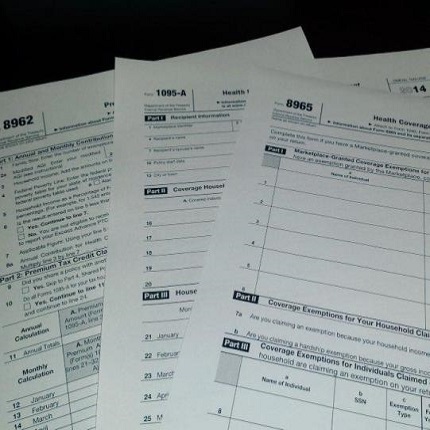 In addition to the normal thrills and chills of the income tax filing season, this year people will have the added excitement of figuring out how the health law figures in their 2014 taxes.

The good news is that for most folks the only change to their filing routine will be to check the box on their Form 1040 that says they had health insurance all year.

“Someone who had employer-based coverage or Medicaid or Medicare, that’s all they have to do,” says Tricia Brooks, a senior fellow at Georgetown University’s Center for Children and Families. But for others, there are several situations to keep in mind.

If You Were Uninsured For Some Or All Of The Year

If you had health insurance for only part of 2014 or didn’t have coverage at all, it’s a bit more complicated. In that case, you’ll have to file Form 8965, which allows you to claim an exemption from the requirement to have insurance or calculate your penalty for the months that you weren’t covered.

On page 2 of the instructions for Form 8965 you’ll see a lengthy list of the coverage exemptions for which you may qualify. If your income is below the filing threshold ($10,150 for an individual in 2014), for example, you’re exempt. Likewise if coverage was unaffordable because it would have cost more than 8 percent of your household income or you had a short coverage gap of less than three consecutive months.

Some of the exemptions have to be granted by the health insurance marketplace, but many can be claimed right on your tax return. The tax form instructions spell out where to claim each type of exemption.

If you do have to go to the marketplace to get an exemption, be aware that it may take two weeks or more to process the application. Act promptly if you want to avoid bumping up against the April 15 filing deadline, says Timothy Jost, a professor and specialist in health law at Washington and Lee University who is an expert on the health law.

If You Don’t Qualify For A Coverage Exemption

If none of the exemptions apply to you, you’ll owe a penalty of either $95 or 1 percent of your income above the tax filing threshold, whichever is greater. The penalty will be prorated if you had coverage for at least part of the year. The instructions for Form 8965 include a worksheet to calculate the amount of your penalty.

If You Received A Premium Tax Credit For A Marketplace Plan

The marketplace determined the amount of premium tax credit people were eligible for based on their estimated income. At tax time those estimates will be reconciled against actual income. People whose income was lower than they estimated may have received too little in advance premium tax credits. They can claim the amount they’re owed as a tax refund.

People whose income was higher than estimated and received too much in advance premium tax credits will generally have to pay back some or all of it.

If you bought a plan on the marketplace, you’ll receive a Form 1095-A from your state marketplace by Jan. 31 that spells out how much your insurer received in advance premium tax credits. You’ll use that information to complete Form 8962.

Assuming the information on the form is correct, “It should be easy to reconcile,” says Judith Solomon, vice president for health policy at the Center on Budget and Policy Priorities. Tax software programs and tax preparers also should know how to make the calculations, she said.

Many lower income consumers and seniors can get free tax preparation assistance through the IRS Volunteer Income Tax Assistance and the Tax Counseling for the Elderly programs.